phobrd: a Particle Photon breakout board 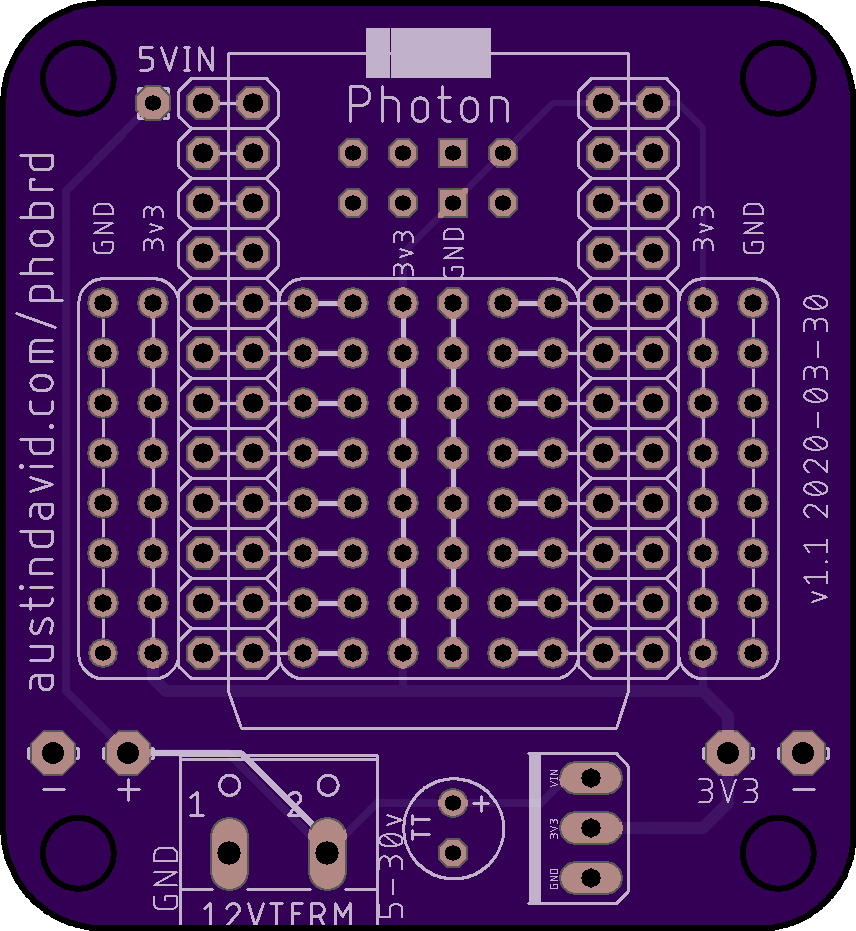 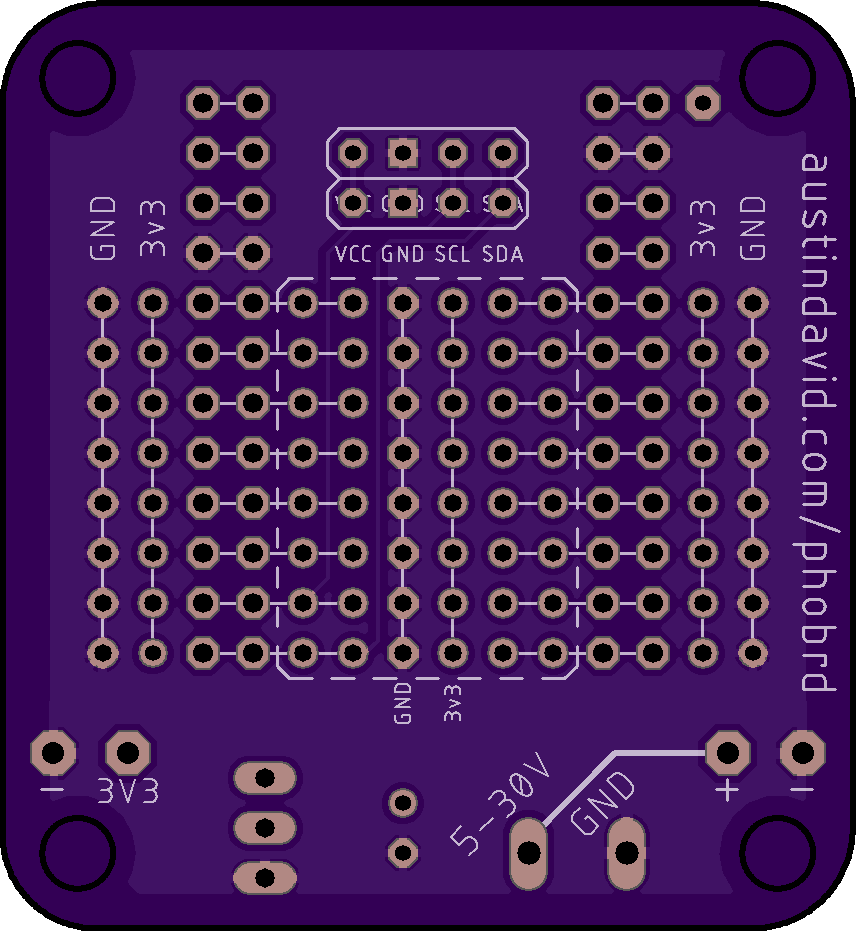 New idea: permanent christmas lights. I read about this on a company "makers" mailing list, no credit to the author (it's been some time, lazy, etc). The idea is simple: use programmable LED strips, mount them (permanently) outdoors, and update them for the seasons.

The LED strips are the easiest part. Amazon sells them in 5m reels (like this), and they can be daisy-chained for arbitrarily-long strips. The LEDs are spaced out, depending on what you want. For side-of-house application, the least-dense option might work well -- 30 LEDs/m, or ~150 LEDs in a 5m segment. That costs like $20 ish. By math they probably consume about 10A per 5m (60mA per LED * 150 LEDs -> 9A, plus various loss along the way. Each strip can have it's own injected power... The linked ones include a waterproof enclosure. One could also feed them into (say) translucent PEX tubing and skip the silicone jacket.

For an MCU platform, I like the Particle Photon (or its kin). Easy stack over wifi (no USB cable) and the "cloud" interface is nice. With minimal programming I can have a web interface to change features like speed, brightness, pattern, etc.

The physical device will be straightforward: a plastic box, maybe 1-2 buttons, a terminal for the 10A power input, and a plug / dongle to tie into the first LED strip. Probably a CdS sensor (light sensor) to adjust brightness, turn off at dawn, etc.

I prototyped the first setup on a breadboard. The LED strips use 5A power which I can pull directly for the MCU, and the MCU drives 3.3v signal which also works great for the LEDs. FastLED library, of course. A simple button (PULLUP + ground) for "change the pattern" (short press) or "change the speed" (long press). CdS is a 10k resistor + the sensor itself, NBD. I made a generic protoboard and they're on order from OSHPark, who are thankfully still open during CORONAPOCALYPSE. 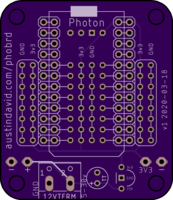 The generic protoboard will do just fine for such a simple project. It has a terminal input for any power level (5-30v), and onboard solder points tied directly. Solder up the 5v pigtail and use the terminal for power supply input. All data pins are broken out in two positions; use D0 for the pigtail data line. Button is easy (mount to a case, one leg to a data pin, one to a GND pin). CdS is almost-as-easy: 10k resistor in the middle line between GND and an analog pin, CdS between 3v3 and the same analog pin on an outside row. Expose that to the side of the case for light entry.

TODO: get the boards, design + print an enclosure.

Animations are really the easiest part of all this. Once the hardware is done one could update the animations via WiFi... For the time being I've really got one class of animation: seasonal colors, moving slowly. When I'm sitting right in front of it I can't tell it's moving, but if I look up every 2-5 minutes it will have completely changed. That's driving in a simple function which uses a seasonal pallet of 4 colors: red-white-blue-white for independence day, green-red-green-red for xmas, orange-black-orange-black for tgiving/halloween, etc. I like these because they're both dynamic and subtle.

Also considering "chasers" or some active animation, but I don't want them to be too annoying to my neighbors, most of whom I like.

Note: this is step 2 of a print / sinter / polish process.

I've spent sort a lot of time figuring out how to print and polish metals. Just because it's neat. There was a LOT of trial and error, and very little actual material I could find reliably, so I hope this log helps any others (or future me) reproduce the results. 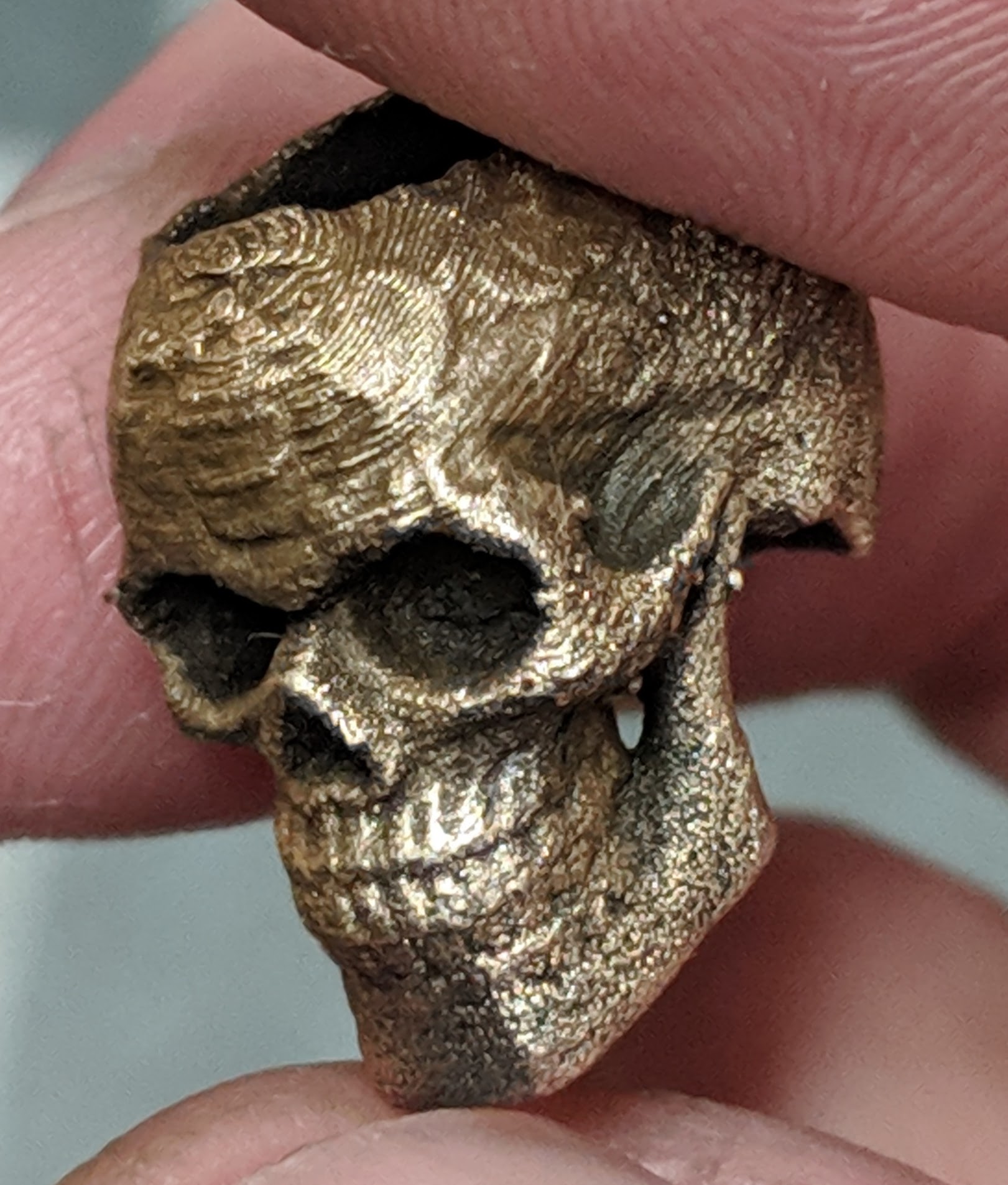 Note: this is step 1 of a print / sinter / polish process.

This is a quick overview for how to print metal filaments in a "normal" 3D printer: Colorfab (Brassfil, Bronzefil, Copperfil), Proto-Pasta (composite SS, Iron, and Copper), and Virtual Foundry (Filamet in bronze, copper, cluminum) sell filaments with at least 50% metal content. Other "metal" filament with less content can be printed like normal PLA (or whatever base plastic) and is therefore less challenging.

Note: this is step 3 of a print / sinter / polish process.

Now that you've successfully printed with "metal" filament, and possibly sintered a solid metal part, you want to make it look nice. These steps are generally chronological, but you can always go out-of-order or do a step again. If you do plan to sinter, I highly recommend a pass of trimming & shaping before the sinter, then further cleanup after.

Note: this is an addendum to the 3rd step of a print / sinter / polish process.

Solid bronze can be finished and polished to a bright luster, not unlike jewelry. It's a very hard, beautiful metal with some cool properties. It cleans up similar to metal-filled plastics, but there are a few steps specific to solid metals.

One of my boys is homeschooled, and even before he did well with some warm-up / practice worksheets at home. I made randomized worksheets in Google Sheets that would let us print out the same types of problems, but with different values. Because he could memorize them (at least the earlier, simpler ones). These are targeted for a 7th grade program but likely apply to 6th and 8th grades.